America's labor force has come a long way since 1950 when men made up over 60% of the workforce. Fast forward to 2018, and women made up nearly half of the workforce. But progress doesn't mean perfection. Despite the steps toward equal employment, there is still an ever-present gender gap when it comes to wages, leadership positions, and treatment. Even in 2018, women aged 25 to 34 earned 89 cents for every dollar earned by their male counterparts and only 24 Fortune 500 CEOs were women in 2018.

When talking about gender gaps in the workplace, most conversations focus on the difference seen in paychecks. However, looking at gender equality usually goes beyond dollars and cents and involves grappling with long-held attitudes about differences between men and women.

The discrepancy between men and women working in science, technology, engineering, and mathematics (STEM) fields is one arena in which there is still a long way to go to achieving gender equality in representation. To get a better idea of how big the gender gap in STEM truly is and where in America the gaps are smallest, we analyzed data from the U.S. Census Bureau's American Community Survey, looking at STEM gaps by degree and occupation. Curious as to which states are making the most progress on gender equality in STEM? Keep reading to find out.

Working in STEM starts with earning a degree – the majority of those working in science, technology, engineering, or mathematics occupations are highly educated, with 65% attaining at least a bachelor's degree. Compared to just a third of non-STEM workers graduating with a bachelor's or graduate degree, the qualifications for STEM workers are significantly more competitive.

There has been some disagreement on whether medical fields (such as nursing) should be considered STEM. When these fields are taken into account, though, women account for more STEM bachelor's degrees. For our analysis, we opted not to include medical fields.

When looking at the differences between men and women graduating with STEM degrees, the majority of states had a significant gap. New Mexico and Montana had the largest gender gap in STEM degrees at 22.5% and 22.3%, respectively. On the other end of the spectrum, Washington, D.C. had the smallest gap (6.8%). New York followed this with a gender gap of nearly 13%.

Interestingly, Massachusetts' gender gap of 15.6% was one of the smallest for STEM degrees. The state also happens to have one of the top schools for STEM majors. Year after year, Massachusetts Institute of Technology (MIT) ranks No. 1 for STEM schools while accepting just 8% of applicants. The school also has made a concerted effort to recruit female applicants, particularly for engineering fields. In 2017, MIT's mechanical engineering department reported that 49.5% of the undergraduate mechanical engineering students were women. 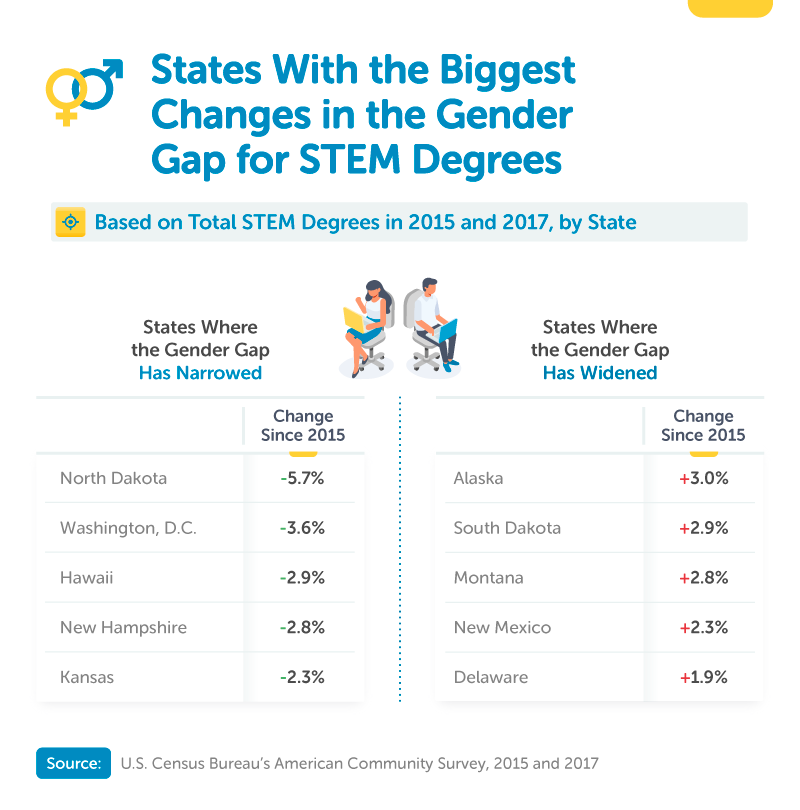 With the gender wage gap hitting a plateau for the past decade, have STEM degree recipients followed suit? In North Dakota and Washington, D.C., the gap in STEM degrees actually narrowed. The states saw a decrease in the gap by 5.7% and 3.6%, respectively, when compared to 2015 numbers. Hawaii, New Hampshire, and Kansas also saw a closing of the gap by at least 2.3%.

The narrowing gap in North Dakota may be due to the state's push for more students to seek STEM degrees – the state has even proposed a bill that would cover the tuition of STEM students' senior year. While the push is directed at both male and female students, it may encourage more women to pursue STEM degrees.

While some states were successful at closing the gap, others experienced an even greater difference between men and women pursuing STEM. In Alaska, South Dakota, and Montana, the STEM degree gender gap has widened by around 3% since 2015. An increase in the gender gap doesn't mean a lack of effort on the states' part, though. Even in Alaska, where the gap increased the most, programs have been created specifically for girls, encouraging them to explore the sciences and potentially pursue the field through higher education.

Working With the Gap

While the needs and economies of each state (including Washington, D.C.) vary, STEM employees are valuable and necessary additions to the workforce. Considering there's a shortage of STEM employees in the U.S., it's increasingly important to bolster this part of the workforce. Bringing more women into STEM could help.

In terms of where states currently were in narrowing the gender gap between STEM workers, Washington, D.C., led the way with a gap of only 13.8% in 2017. Maryland followed this, a state that boasts one of the largest concentrations of STEM workers in the country.

Progress in the Workforce 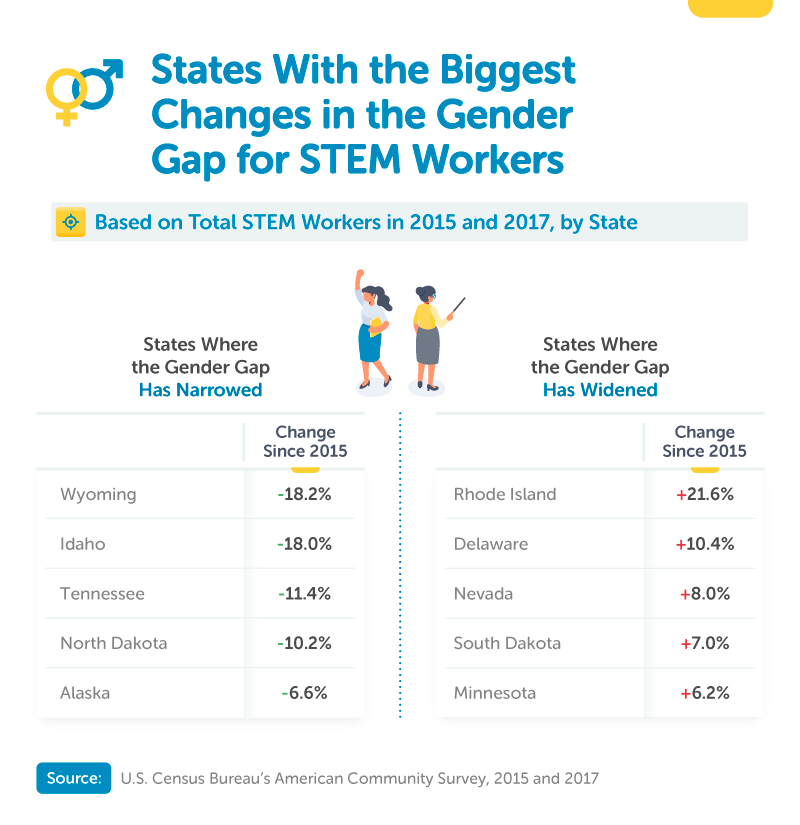 Rhode Island topped the chart for the largest gap in STEM workers while also having the largest widening of the gap – since 2015, Rhode Island's gender gap in STEM workers has widened by 21.6%. The difference in the gap size between STEM degrees and STEM workers may be due to the popularity of industries in the state. According to the latest census, women dominate health care support occupations, including registered nurses, while men command construction and extraction occupations.

On the other end of the scale, the gender gap in Wyoming and Idaho narrowed by 18.2% and 18%, respectively. Gender equality among STEM workers has also increased in Tennessee, North Dakota, and Alaska since 2015. 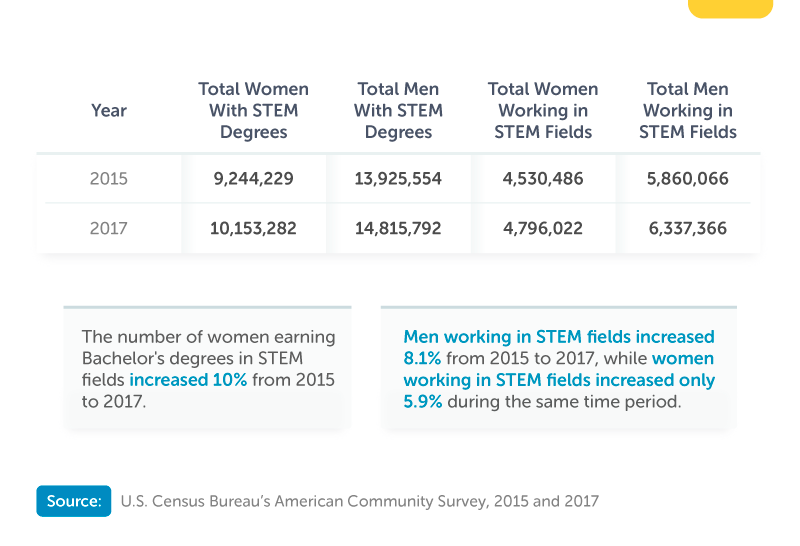 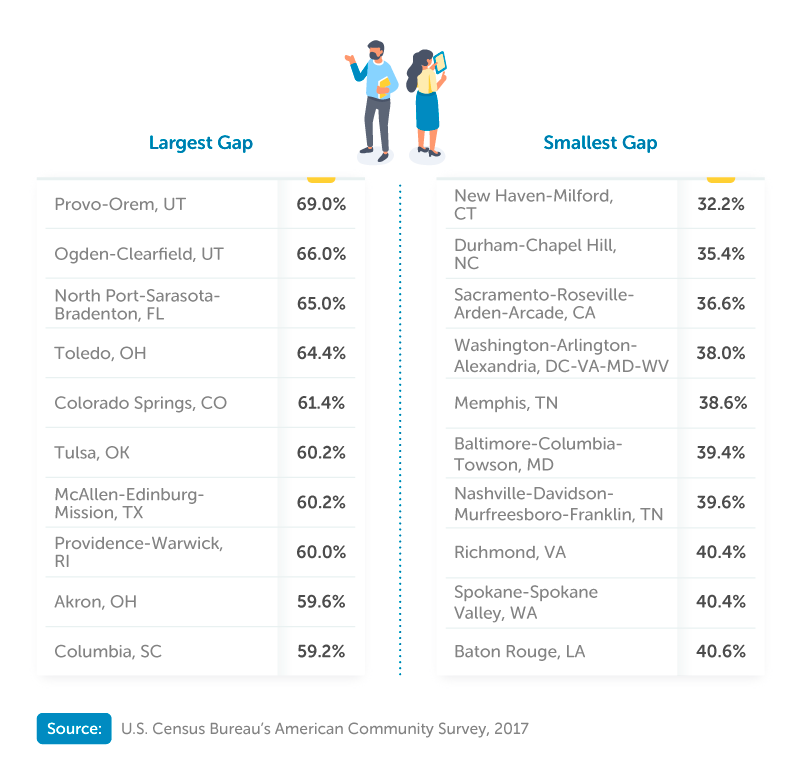 Thinking of technological innovations and scientific discoveries, it would make sense for STEM hubs to reside in urban areas. Silicon Valley and San Francisco are often thought of as the "places to be" for STEM jobs. They might have some competition, though. Orlando, best known for housing Mickey Mouse and friends, also happens to be the fastest-growing city for STEM-related jobs. Charlotte, North Carolina; Grand Rapids, Michigan; and Nashville, Tennessee, followed in Orlando's footsteps. However, we wanted to know which areas are closest to gender parity in STEM workers.

Gender equality in America has come a long way – the gap between men and women in the workforce has narrowed tremendously since 1950. However, the narrowing of the gap has been stagnant for almost two decades. Men continue to dominate industries, especially scientific, technology, engineering, and mathematics occupations. But in STEM fields, gender equality is about so much more than diversity. It's about having voices heard and creating innovations relevant to half the population. Without the voices of women present in laboratories or technological industries, products will be created by one gender for one gender. Closing the gap takes time, and some states and their metropolitan areas are seeing a decrease faster than others.

Seeing more women in STEM fields starts early with education, and with technology doing everything for us these days, it can be easy to forgo learning basic but highly valuable skills. Whether you're just starting your educational career, or are on your way to breaking the glass ceiling, Typing.com has resources to help you help your students succeed. Our recently launched Tech Readiness, Career Preparation, and Coding Basics curriculum introduces students to computer basics to give them a strong foundation for interacting with the digital world. To learn more, visit us online today.

We used the 2017 estimates of the U.S. Census Bureau's American Community Survey (ACS) to figure out the gender gap in science, technology, engineering, and mathematics (STEM) fields. We looked at STEM gaps by field of degree and occupation.

The field of degree was based on the reported majors of respondents' bachelor's degree(s). Our analysis looked specifically at the percentages of men and women whose degrees fell into the ACS category "Science and Engineering." More information on what specific fields fall into this category can be found here.

The data on occupation describe the kind of work a person does in his or her job. Our analysis looked specifically at the percentages of men and women whose occupations fell into the ACS category "Computer, Engineering, and Science Occupations." More information on the ACS definition of occupation can be found here.

When looking at the gender gap in STEM fields for workers in metropolitan areas, we looked solely at metro areas where the total civilian employed population 16 years and older was 250,000 or more for clarity.

While women have made significant strides both in and out of STEM fields, there's still more ground to gain. If you know someone considering studying science, technology, engineering, or mathematics, feel free to share this project with them. If you choose to do so, please link back here so that they can see the study in its entirety. Sharing the full study for noncommercial purposes also gives our contributors credit for their valuable work.