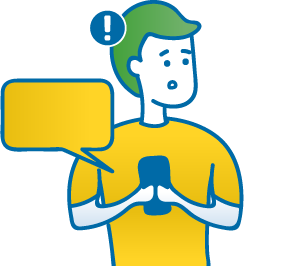 The average office employee spends 2.5 hours every weekday checking their email. No matter how much we try to implement new project management tools, group chat applications or even relying on more in-person communication, there seems to be no eliminating email correspondences.

Unlike more casual chat applications, though, you might hem and haw over the verbiage and tone of your email to avoid miscommunication. You want to sound casual (but not too casual), to the point (but not rude), and clear.

All of that is before double-checking your attachments, fact-checking your message, and hitting the grammar button. In fact, with most emails, once you hit send, you can never take it back.

But what if you could take back a bad email or text message? For a closer look at some of the most awkward and unfortunate times after hitting "send" accidentally, we asked more than 1,000 people to weigh in on their biggest messaging gaffes. Read on as we break down how frequently people send messages to the wrong people, their most embarrassing mistakes, and the best options for explaining these communication blunders. 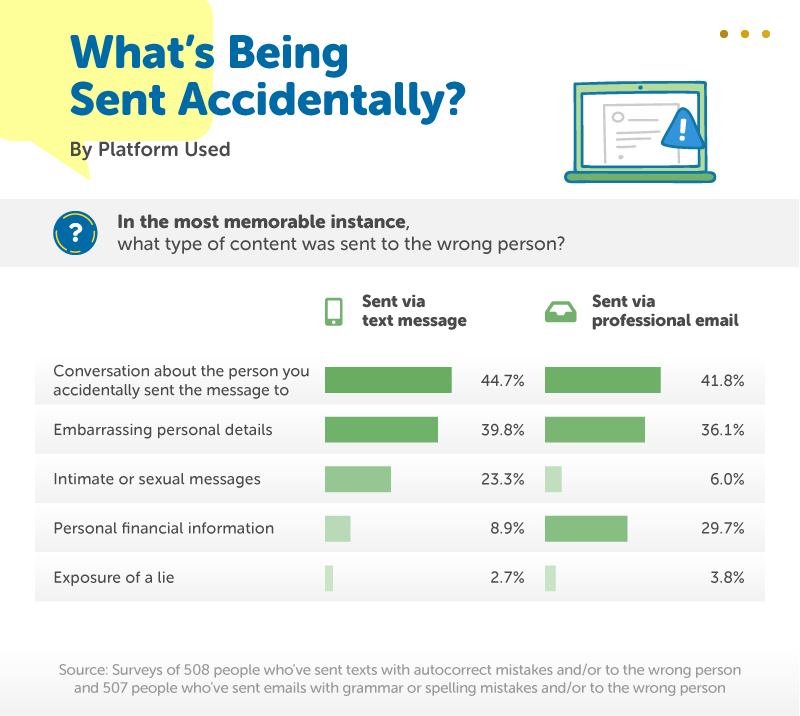 In some cases, if you send a text message or an email to the wrong person accidentally, you can easily correct the mistake. That is unless you've revealed something so embarrassing the recipient isn't sure to forget.

Nearly 45 percent of people sending text messages and almost 42 percent sending professional emails accidentally sent their conversations to the person they were talking about. Sending an email might not make you any less likely to reveal personal details, either. Compared to about 40 percent of people revealing embarrassing personal details over text, 36 percent did the same in their professional emails. Another 23 percent of those hitting send too soon on texts mistakenly forwarded intimate or sexual messages to the wrong person.

Among those sending professional emails to the wrong people, nearly 30 percent even admitted to including personal financial information. It's important to recognize the right way to securely send financial data and documents to ensure they get where they're meant to be. 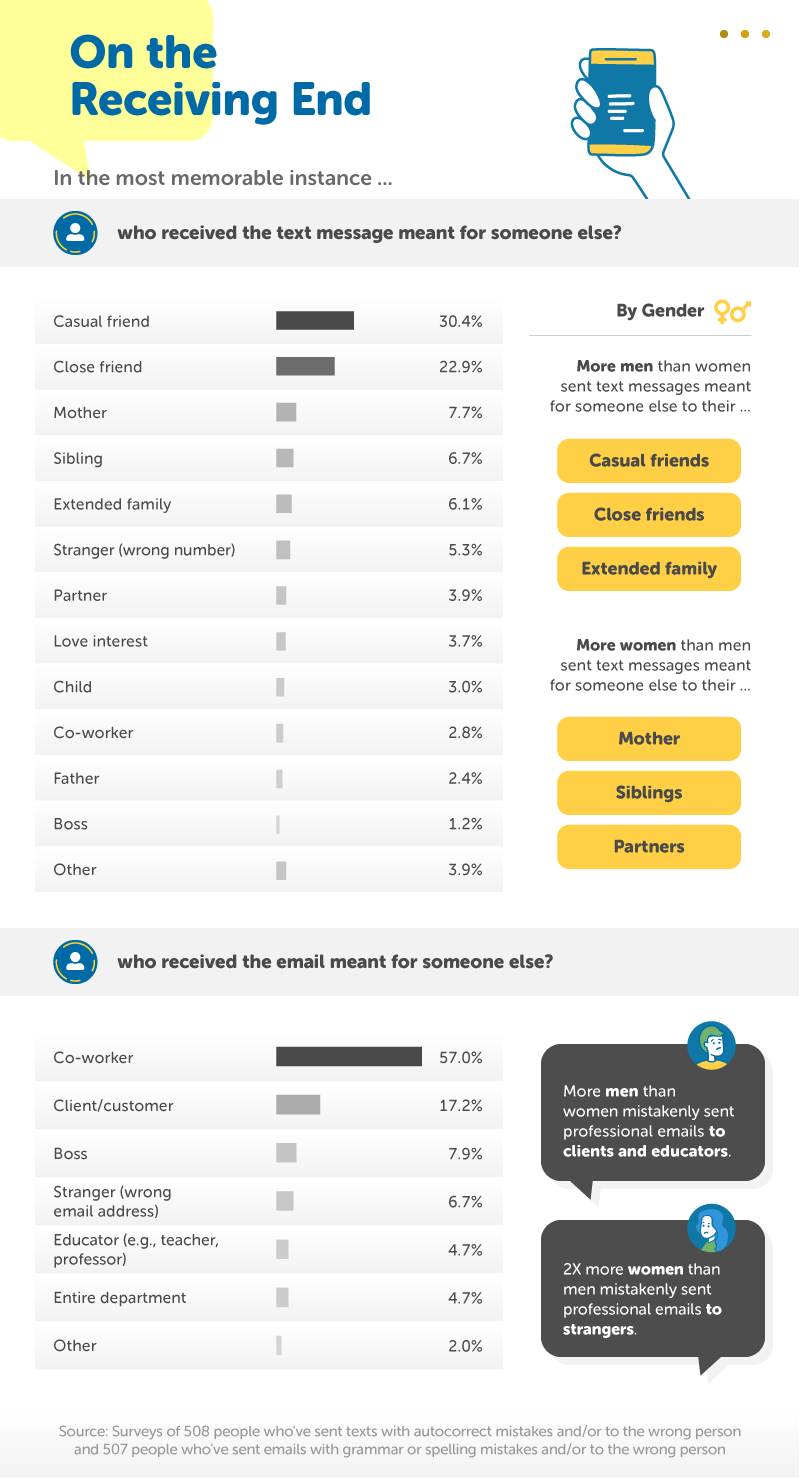 Casual friends have their advantages. While your connection may not be as deep as with close friends, casual relationships can give you more variety in the people you spend time with, promote relaxation, and give you a different perspective on things from time to time.

Still, you want to make sure you're comfortable enough sharing an embarrassing moment or two. Over 30 percent of respondents who sent text messages to the wrong people said the mistaken correspondence went to a casual friend, compared to almost 23 percent who said the wrong message went to a close friend instead. Men were also more likely than women to send accidental texts to casual friends, while women were often more likely than men to send the wrong texts to their mother or siblings.

When asked about professional work emails, 57 percent of people accidentally sent the wrong message to a co-worker, although another 17 percent did the same with a client or customer and 8 percent to their boss. Women admitted to mistakenly sending professional emails to strangers twice as often as men. 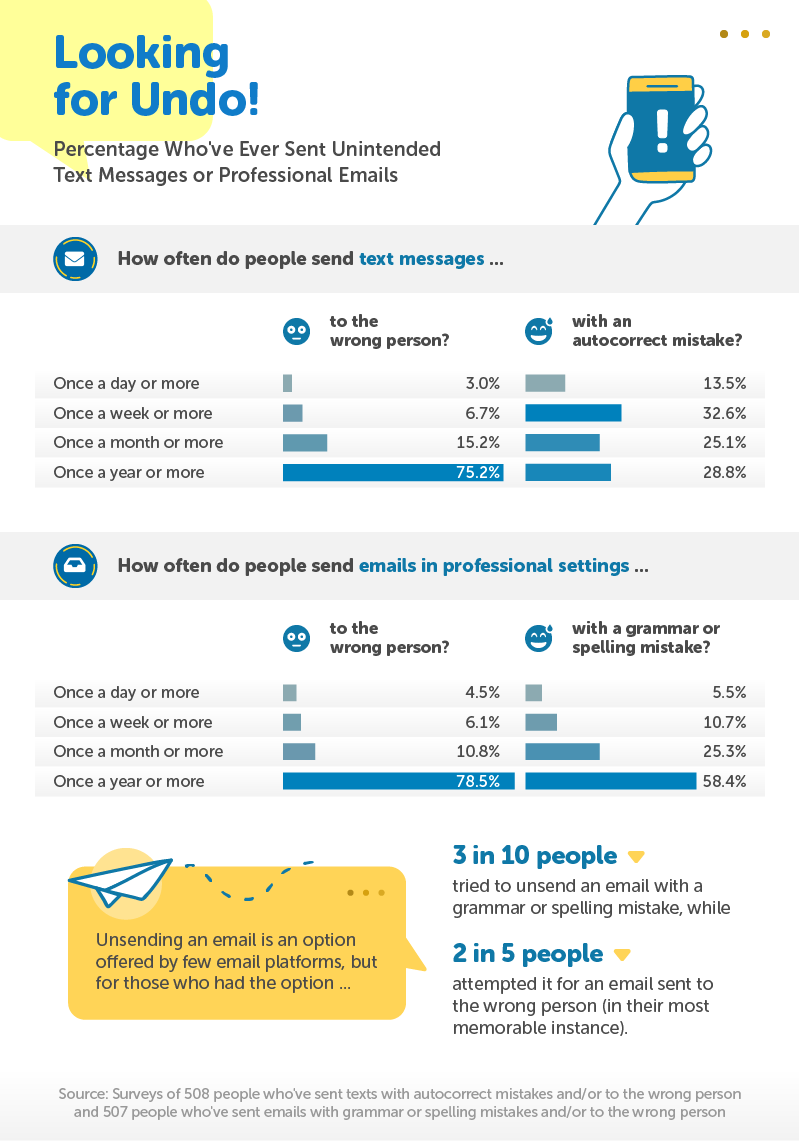 If you aren't careful, you might accidentally send an embarrassing message to the wrong person. Whether it's an unfortunate spelling mistake, the wrong attachment, or the wrong greeting or closing sentiment, you may want to crawl under your desk rather than deal with the awkward fallout.

You might need to be more diligent about autocorrect or spelling mistakes, though. Nearly 28 percent of people sent text messages to the wrong person once every few months, and another 47 percent only did so once or twice a year. By contrast, 22 percent sent text messages with autocorrect mistakes several times a week, and close to 8 percent said they made these blunders multiple times a day.

Perhaps because they're more inclined to send emails in a professional setting, people were less likely to make mistakes with more formal digital conversations than text messages. While almost 23 percent of people admitted to sending a professional email to the wrong person once every few months, less than 12 percent sent emails with grammatical or spelling errors once a month. People sending emails made spelling mistakes once every few months (nearly 28 percent) or just once or twice a year (about 31 percent). 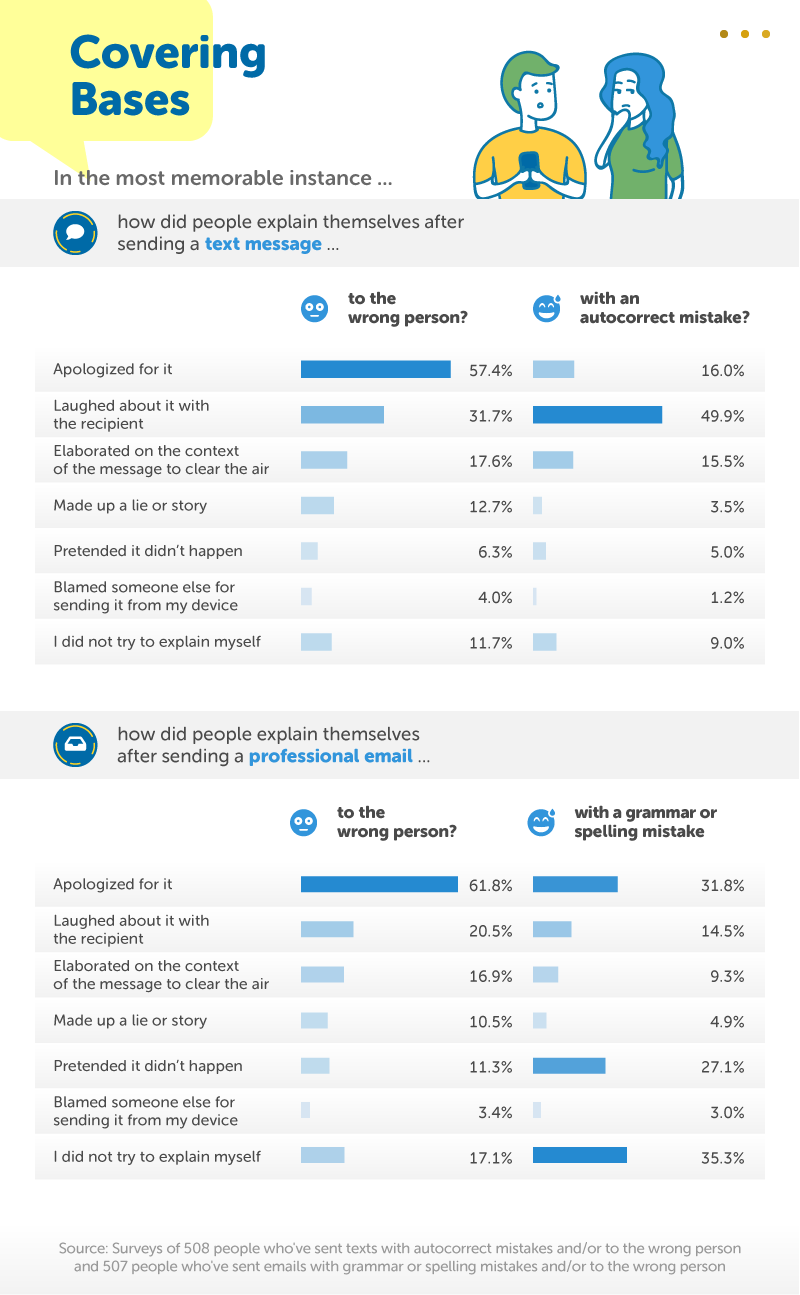 No matter how much you'd like to bury your head in the sand after hitting "send," there's little chance in taking back an embarrassing text message or email. Whether you're typing too quickly or are in a compromised state of mind that makes it difficult to tell exactly who you're talking to, you may wish you'd said nothing at all.

Autocorrect mistakes might also be more acceptable over text message than through email. Compared to almost half of the people who'd experienced an embarrassing flub over text with autocorrect and laughed it off, 27 percent of people sending professional work emails had to pretend it didn't happen, and less than 15 percent tried to make light of the mistake with a joke.

Making the Most of a Mistake

In much the same way that crafting the perfect email can seem like an untenable task, navigating dating through digital messages has similar setbacks. Having to decode each other's hidden meanings, deciding who will break the silence first, and even figuring out which emojis are appropriate can be difficult. As much as forgoing text messaging might be better for your relationship, you can use the occasional messaging gaffe to your advantage.

Of those surveyed about texting, 1 in 5 admitted to sending a message to the "wrong person" on purpose to start a conversation. For almost 63 percent of men and about 61 percent of women deliberately sending their texts astray, these messages were sent to a love interest. While women were more likely than men to use "accidental" texts to start a dialogue while arguing with the recipient, and men did the same more often than women as a prank, respondents did so primarily because they had a crush on the recipient.

Not Funny After All 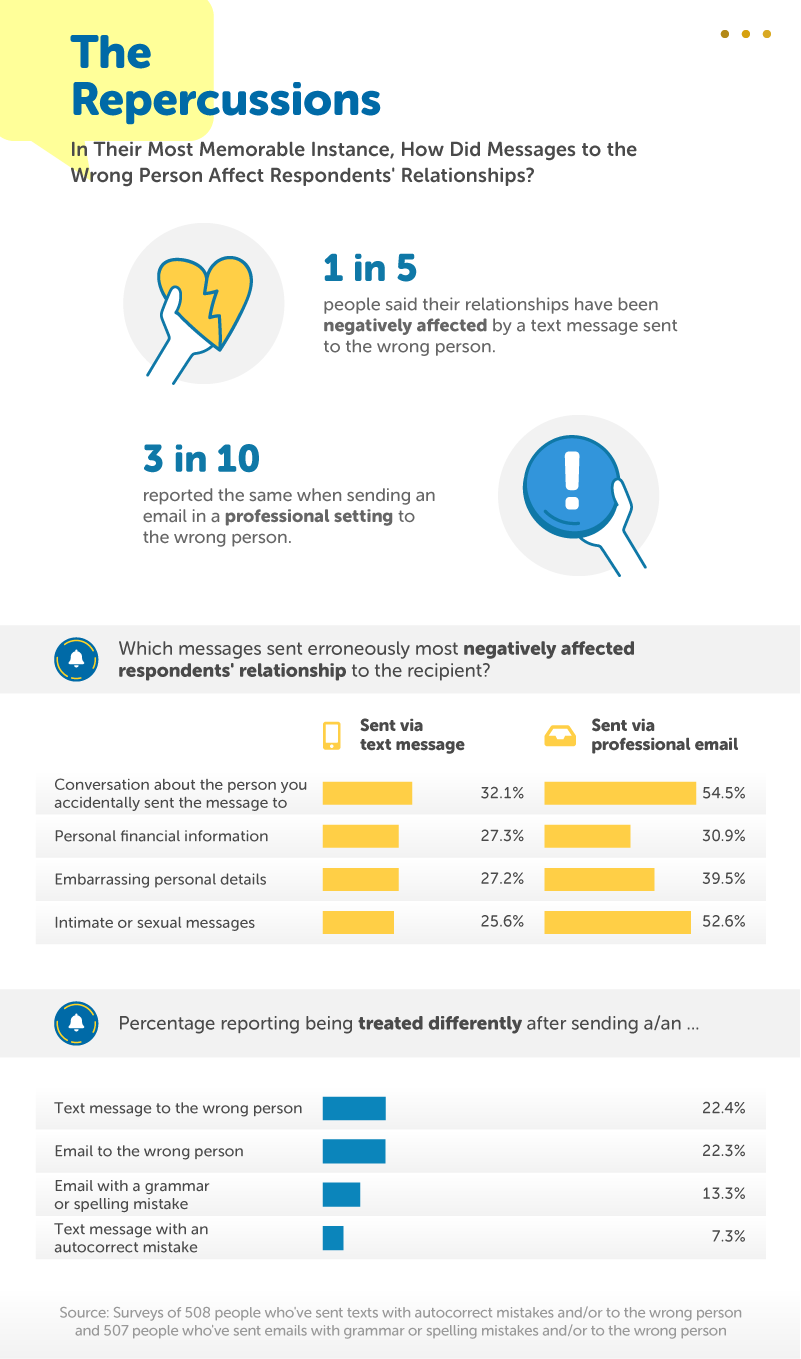 Digital communication is supposed to make the way we interact with one another easier. Instead, the nuance that goes into crafting a message, imbuing it with proper tone and diction, and ensuring there are no mistakes is often far less efficient than if we picked up the phone or met in person.

Sending text messages or emails to the wrong person can sometimes hurt your relationship, even when those messages are sent accidentally. Among their most memorable instances, 1 in 5 people said their relationships were negatively affected by text messages sent to the wrong person. Another 3 in 10 people said the same about professional emails. Text messages that contained details about the unintended recipient were often the most damaging (32 percent), followed by those with personal financial information (27 percent). Communication sent via professional email that discussed the unintended recipient also had the most negative impact (almost 55 percent), followed by emails with intimate or sexual messages (nearly 53 percent). 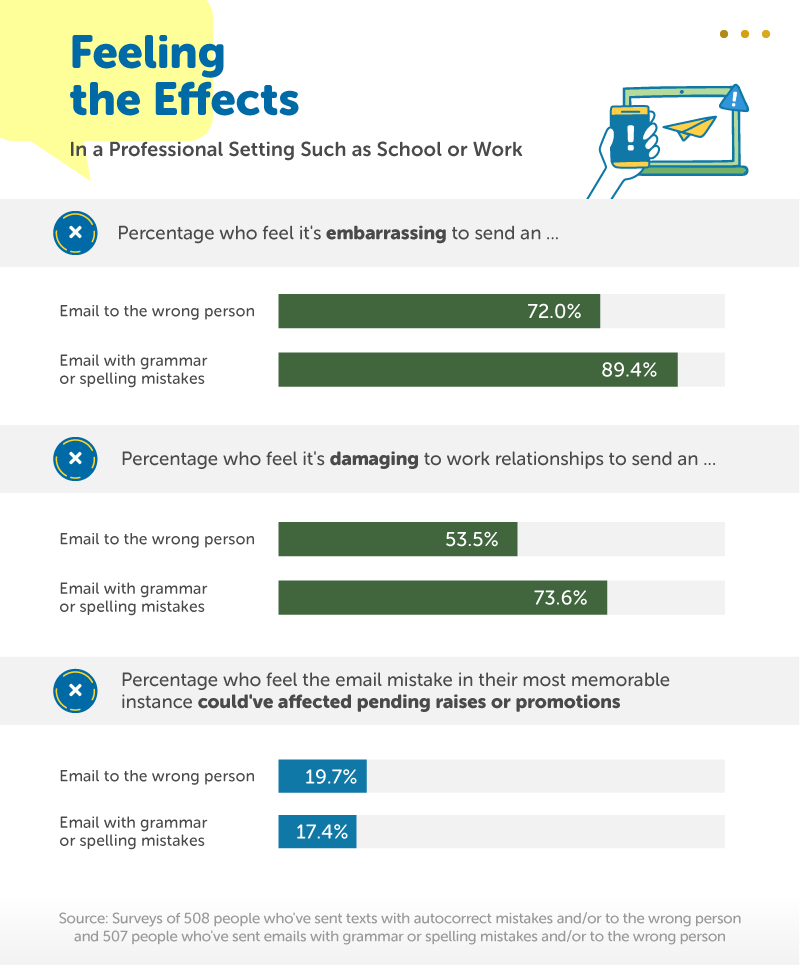 In most industries, email is necessary to be successful at work and should be considered a fundamental part of training. Experts say communication is at the core of business, and written communication is no different.

Be Mindful of Your Messages

Digital communication has become so easy that we may not put a tremendous amount of thought or energy into it. Just because hitting "send" isn't difficult, though, doesn't mean we shouldn't be careful with our written communication, even when it's a casual conversation between friends. It's easy to send something that isn't grammatically correct, has the wrong attachment, or is even directed toward the wrong person if you aren't paying attention. As we found, these actions, accidental though they may be, can have unexpected negative consequences for both your relationships and career.

Want to reduce typos and mistakes in your digital communication? At Typing.com, we're committed to helping people learn to type for free. With over 25 million students around the world, Typing.com lets you learn through engaging curriculums, custom themes, interactive lessons, and typing games to make flexing your keyboard skills a breeze. From school to work and beyond, your written communication skills will follow you everywhere. Perfect them at Typing.com. Visit us to learn more.

Think you might have hit "send" on this story accidentally? We won't judge you for sharing this story with your readers for any noncommercial use as long as you include a link back to this page in your story.