Couple's Communication in the Digital Age 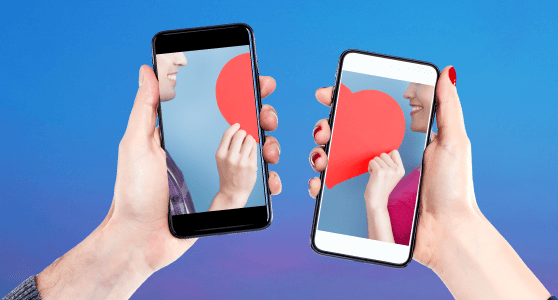 The average person picks up his or her smartphone over 85 times every day for an average of 30 to 120 seconds at a time. Today, there's almost nothing you can't do with the touch of a button on your mobile device, from conducting business to ordering groceries and online dating.

One aspect of our life has been completely revolutionized by the prevalence of digital technology: communication. In a world where people would rather leave their wallet behind in place of their phone, sleep with their device within arm's reach, and even carry their smart tech into the bathroom, younger generations are more likely to communicate digitally than in person.

Given how much of successful communication is owed to body language and nonverbal cues, technology is often considered the death of meaningful relationships – but is it really all bad? To find out, we surveyed over 990 people currently in relationships regarding the role digital communication has on their romantic connections. Read on to see what we learned. 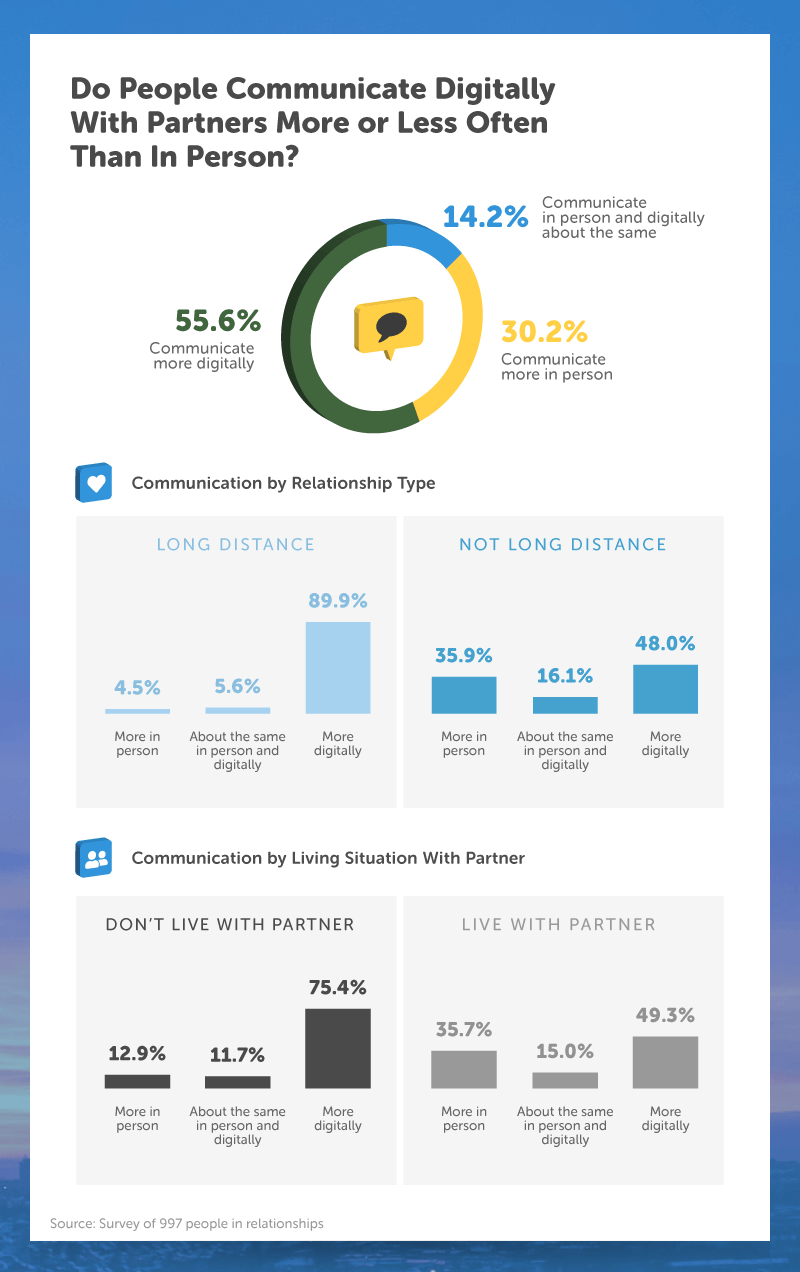 Successful, long-term relationships are built on a few fundamental principles. Among these are mutual respect, honesty, trust, and communication. By some standards, good consistent communication is among the most important aspects of a healthy relationship, beating out sexual intimacy and the ability to make each other laugh.

Ninety percent of people in long-distance relationships communicated digitally more often than in person. Similarly, over 75 percent of couples who didn't live together acknowledged the prevalence of digital communication over in-person interaction. Even people living with their partners (49 percent) or near one another (48 percent) admitted to communicating more often through digital channels than in person. 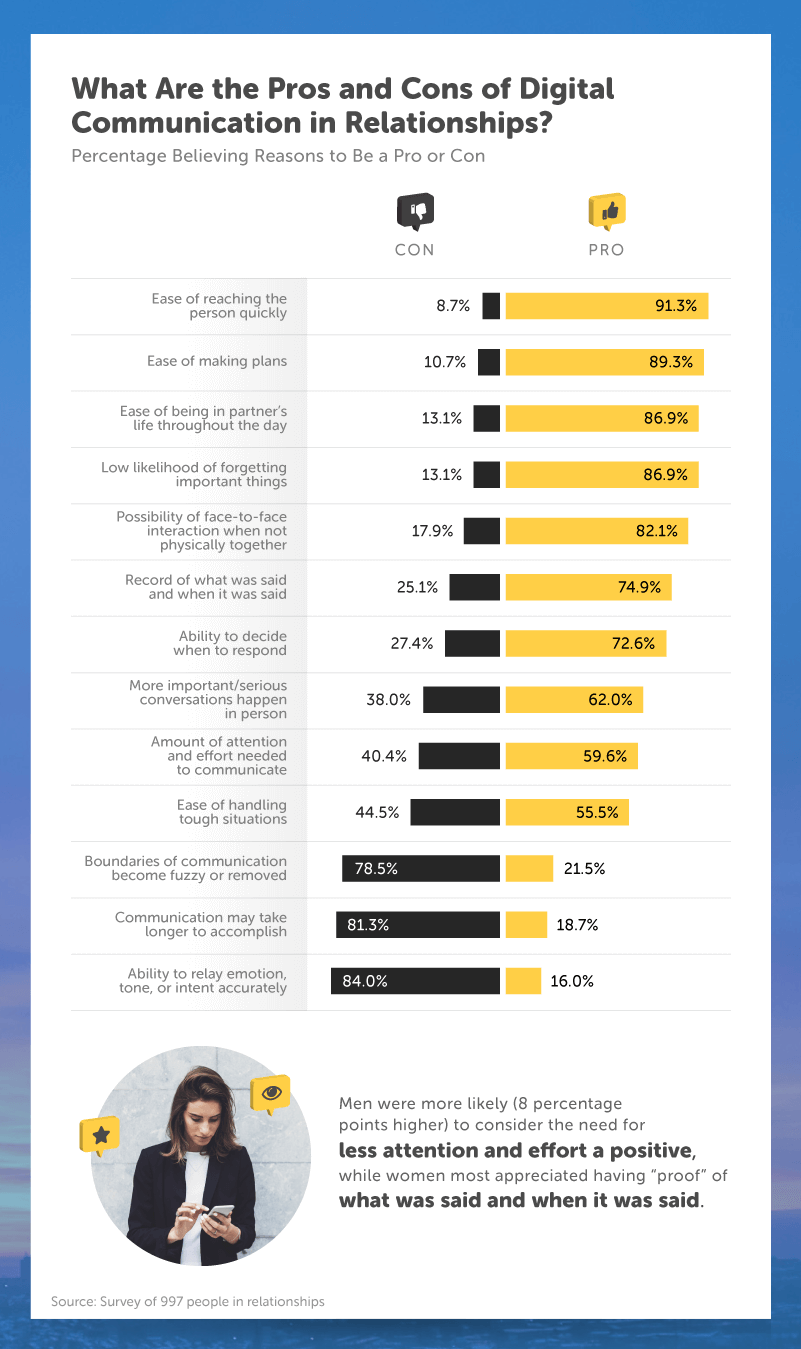 Over 91 percent of people in relationships identified the convenience of quick communication as the leading advantage of digital conversation. While it's possible to have too much communication between partners, it's hard to deny the advantage of sending a quick text message to coordinate things like dinner plans. Ease of making plans (more than 89 percent), checking in throughout the day (87 percent), and remembering important details (87 percent) were also cited among the most common pros of digital communication.

In contrast, more than 4 in 5 people called out the inability to relay emotion accurately as the biggest disadvantage of digital communication. In addition to digital communication taking longer to accomplish than in-person conversations, there are some conversations couples should never attempt to facilitate through text messages. The lack of physical connection in addition to the absence of body language and nonverbal cues makes having very important conversations digitally a near impossibility. 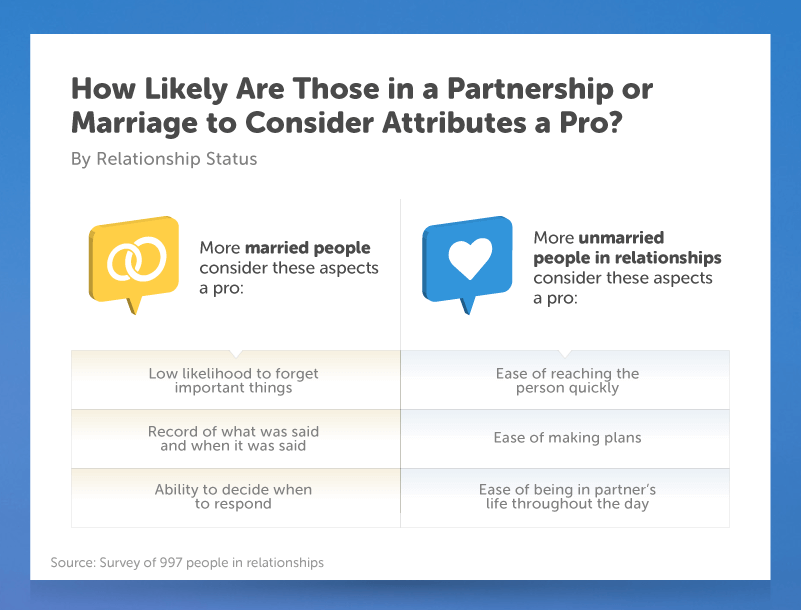 No matter how strong your relationship is before getting married, taking things to the next step will always be different than when just dating or engaged. Married couples often start to see each other in a new light and feel less "tied down" and more relaxed than before they tied the knot.

Married couples also rely on digital communication in a different way compared to people who are dating or engaged. As we found, the biggest advantages of staying in touch digitally for spouses included remembering important details, keeping a record of conversational exchanges, and being able to decide when to respond. For people not yet married, digital communication was best as a means of reaching each other quickly, making plans, and staying connected throughout the day. 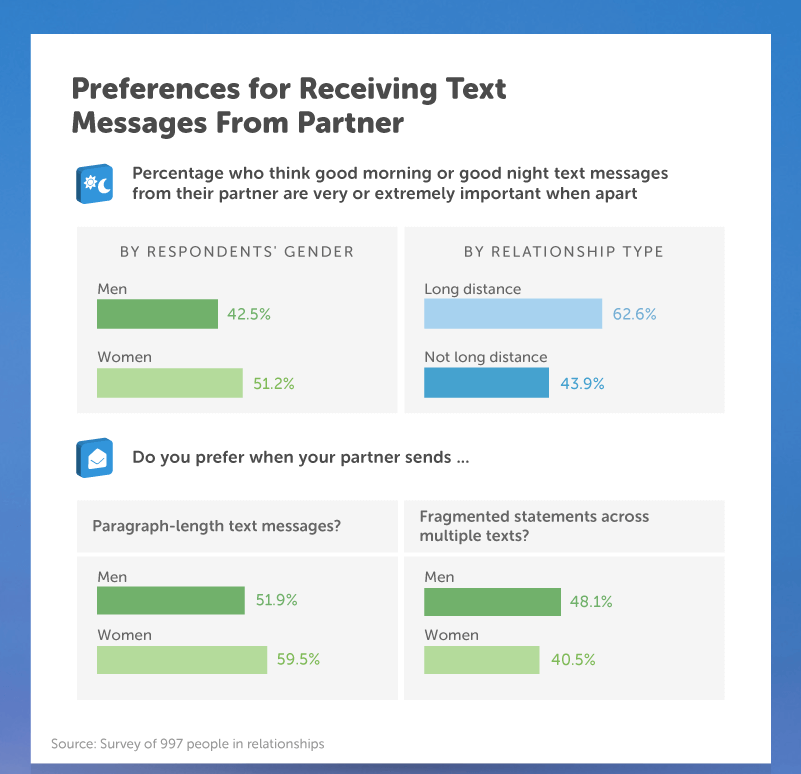 Sure, texting your partner is quick and easy, but it can also add unneeded pressure if you aren't careful. In fact, checking in with each other constantly can smother one or both people in the relationship. While you can't avoid digital communication entirely, it's important to find a balance.

Roughly 51 percent of women and over 42 percent of men acknowledged that "good morning" or "good night" messages from their partners were either very or extremely important when apart. Women were also more fond of sending longer, paragraph-style messages (nearly 56 percent) than men (almost 52 percent). While there may be nothing wrong with sending shorter, more fragmented messages, having more to say is often a sign of a deeper, more personal connection. 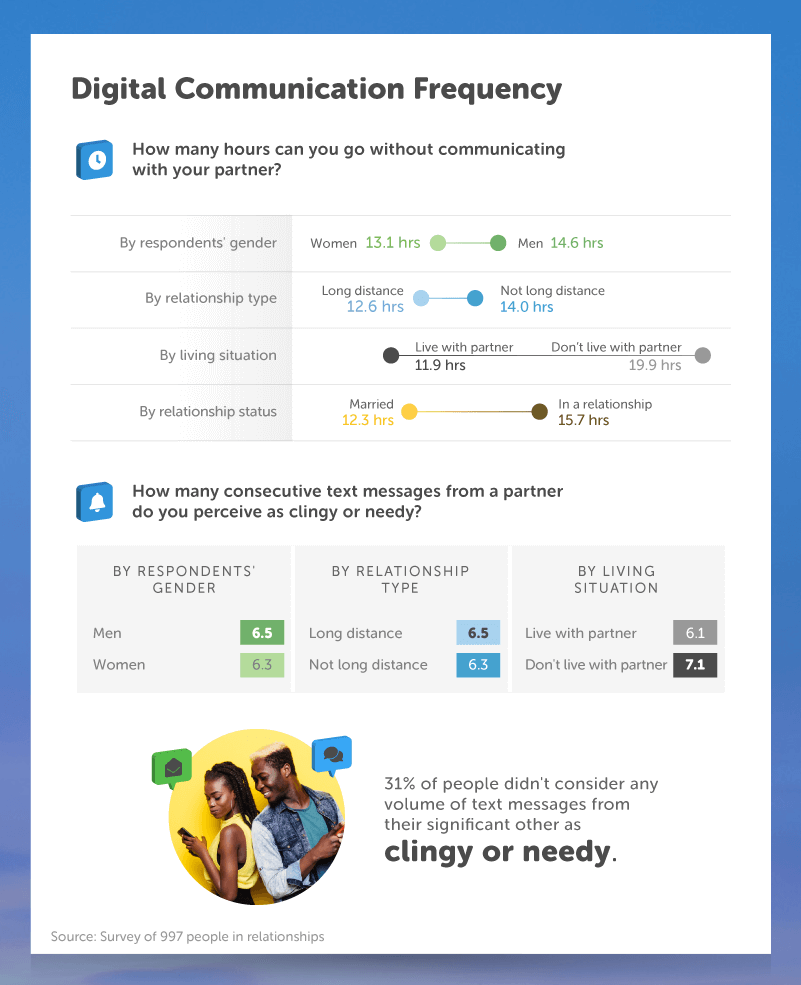 No matter how much you enjoy each other's company, if you're too clingy, things may end quicker than anticipated. While it's not uncommon for one person to be more committed in the relationship, there comes the point where trying to be too close or connected crosses a line.

Living together or being married may mean you have more to talk about than those in a casual relationship. On average, people could only go 12 hours without talking to their spouses, as opposed to nearly 16 hours for people either dating or engaged. While 31 percent of people didn't perceive any specific volume of text messages from their significant other as smothering, you may still want to monitor your usage. Across all relationship types, more than six text messages consecutively were seen as being clingy or needy. 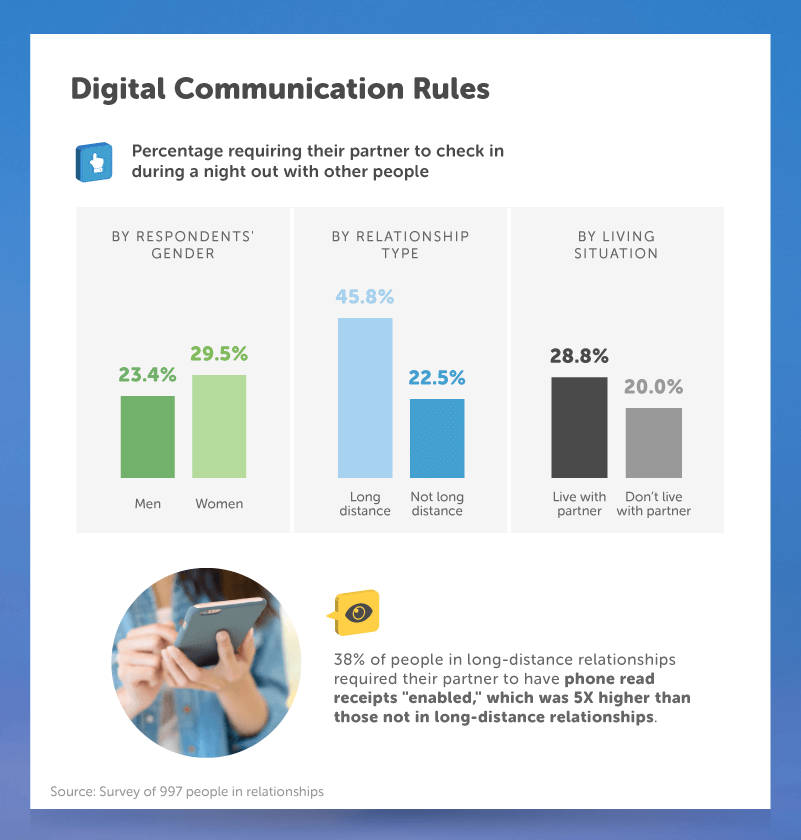 While people in long-distance relationships often required their partner to check in via text during a night out with other people (46 percent versus 23 percent of people not in long-distance relationships), living together may heighten the need to keep each other updated more frequently. Nearly 29 percent of people living with their partners required a check-in message during a night out compared to 20 percent living apart.

Waiting on a Reply 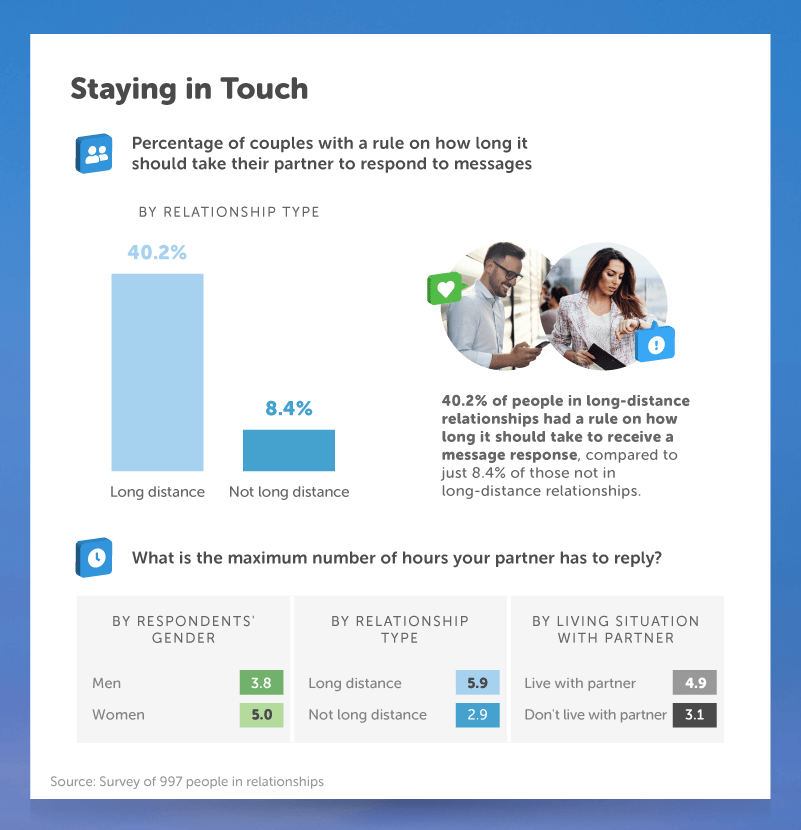 Your relationship may also have rules on how long you're allowed to let a text message go without responding. When you start dating someone new, you might take a more strategic approach to respond to texts or other digital communication. Respond too quickly, and they might see you as being desperate. Wait too long to respond, and they might think you're ghosting them. 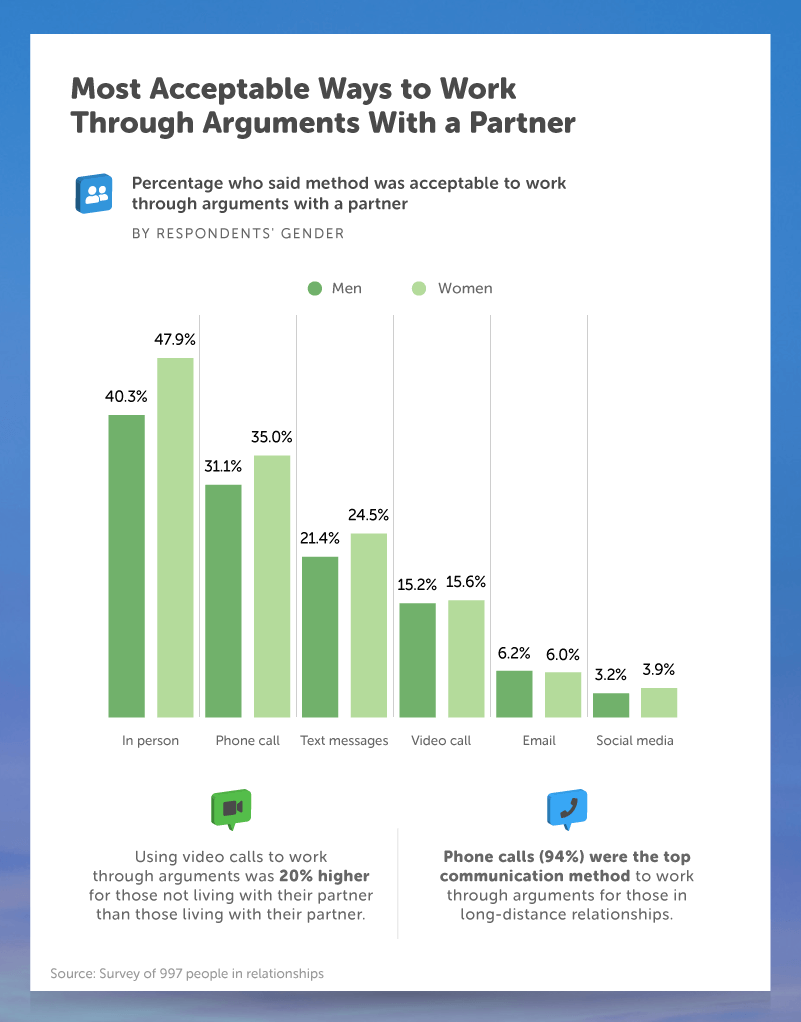 No matter how long you've been dating (or married), constant texting is a part of modern relationships. While you might not be able to resist sending a few negative messages occasionally, relationship experts suggest facilitating arguments through digital channels is one of the worst ways to hold these conversations. Because too much is "lost in translation" over text, it's difficult to articulate your point effectively or avoid making someone feel worse about the conflict you're trying to mediate. 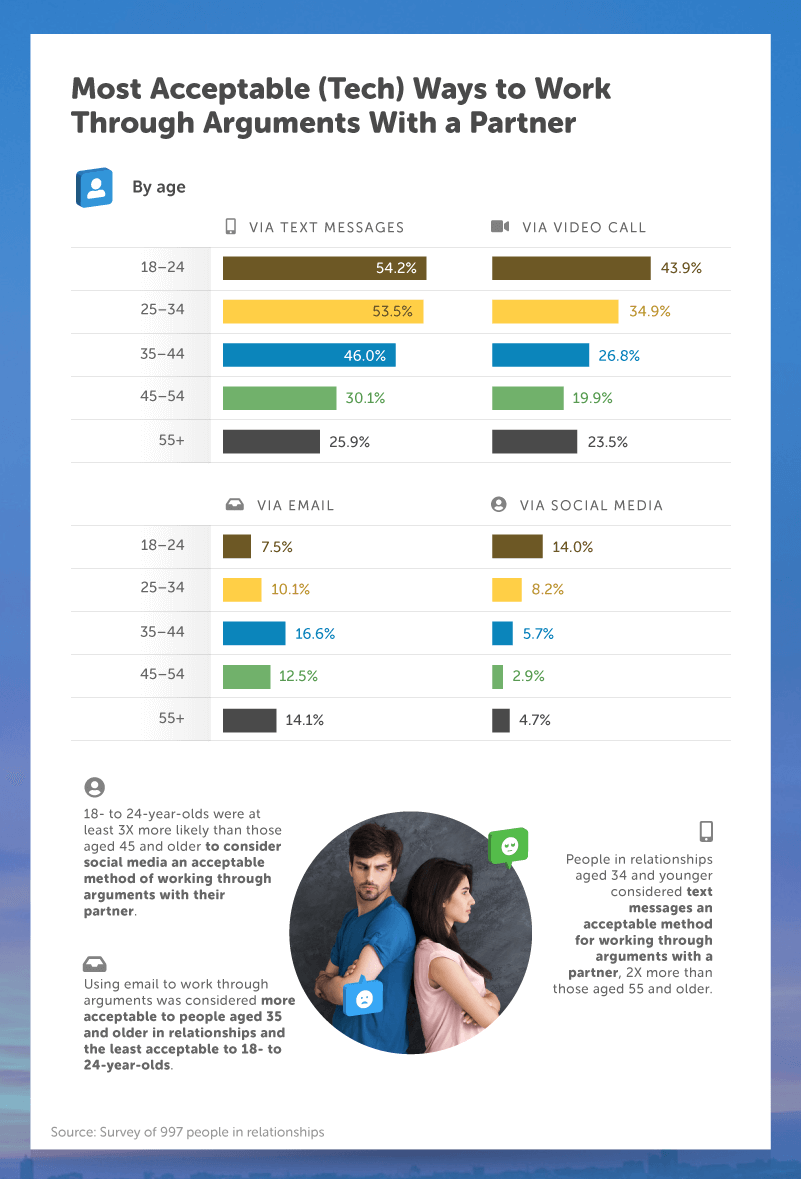 Unlike older generations who've adapted to digital communication over time, millennials and the generation after them grew up with smartphones, internet messaging, and the mobile revolution. This exposure may be one of the fundamental reasons younger couples prefer to text in almost every scenario as opposed to talking over the phone or in person.

Skills for the Future

Every day, all over the world, we send more than 18 billion text messages. If you add in the messages sent through social media apps like Facebook and WhatsApp, the total number of digital messages rises to more than 60 billion. While you might not be able to avoid communicating with your significant other digitally, it's important to take the good with the bad in these pixelated conversations.

Couples loved being able to make plans, remember important events, and check in on each other's day but admitted that relaying emotion digitally could be difficult. Even if you're tempted to type out your grievances, it's best to leave harder, negative conversations for those in-person moments.

Today, texting and typing are a massive part of the world we live in. From the messages we send our partners to business emails and school reports, effective typing is crucial successful communication. When you're ready to step up your game, Typing.com is where the world learns to type. With over 427,000 teachers and 25 million students, our interactive lessons keep people of all ages engaged and eager to learn more. Typing is a quintessential life skill in the digital age, and our mission is to connect teachers and students through engaging curriculums and customized lessons. Learn more and sign up at Typing.com today.

Like our study results and want to chat about them? We don't need a text message notification for you to share the results of the survey with your readers for noncommercial use. Just include a link back to this page so that our contributors get credit for their contributions to this analysis.