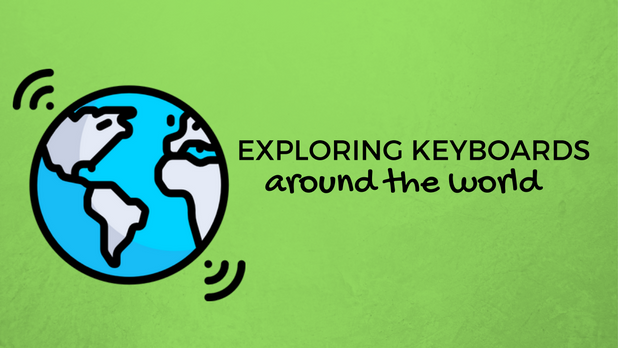 Exploring keyboards around the world

There are somewhere around 7,099 known living languages in the world.

Chances are you only encounter at most 2 or 3 of these languages on a day-to-day basis, but you probably have some things in common with the people who communicate in other languages.

You might enjoy similar games or sports or have the same favorite flavor of ice cream. And just like you, people speaking various languages all over the world have had to practice typing for school, work, or leisure.

But wait a second, don’t those language differences affect typing?

Of course, they do!

Aside from the standard QWERTY keyboard used in the U.S., there are actually many different keyboard layouts available to accommodate different languages.

The keys on these international keyboards are located in different places based on the letters and accents that are used most frequently.

How keyboards differ in different countries

A few other keys are also moved around on the French keyboard (instead of QWERTY, the first row reads AZERTY).

Another slight modification to the QWERTY keyboard is the QWERTZ keyboard, used mainly in central Europe. There are even multiple versions of this format to suit the various languages and dialects used in this region of the world.

There are several other international keyboards as well, such as the Russian keyboard which features an entirely different set of letters from the Cyrillic alphabet (vs. the Latin-based English alphabet).

Aside from changes to accommodate language differences, there are a few keyboards featuring different layouts based on efficiency in typing English.

The most notable is called the Dvorak keyboard, named after its inventor August Dvorak, who discovered a more efficient and comfortable configuration of keys to improve typing speed and user experience.

Using this layout, users can type more words without moving their fingers away from the home row, although the widespread use of the QWERTY design means this layout is rarely seen or taught.

How to change your keyboard settings

Most students will only need to learn typing on a single keyboard format. Nonetheless, it’s useful and interesting to know about the differences in layouts.

Even better, most computers allow users to change the keyboard format in the settings. So, even if you’re far from home in another country you can always find the “home row.”

There’s just one problem. Even if the computer registers the QWERTY layout, the keys at your fingertips still have the same markings. That means that when traveling, touch typing (typing without looking at your fingers) is more important than ever.

Our typing lessons work not only for students with the standard American QWERTY keyboard. From the Student Portal, users can go into their account settings and select the keyboard layout they want to use.

Now that you know about the many different keyboard layouts, you may find it a relief that you only have to learn how to use one of them!

11 thoughts on “Exploring keyboards around the world”