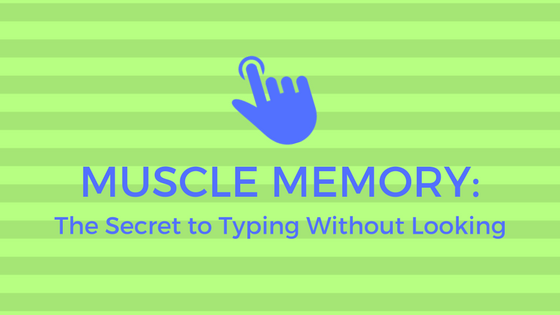 The Secret to Typing Without Looking at Your Fingers

As Olympic swimmer Michael Phelps stepped up to the block in Beijing, he felt confident he was to win the gold medal.

But just seconds after his dive water started to seep into his goggles, and pretty soon they were completely flooded!

For most of us, that would be cause for panic. But Phelps wasn’t phased as he swam his final two laps completely blinded to set a world record in 200 meter butterfly!

His muscles didn’t need his eyes to make stroke after stroke. They already knew exactly what to do.

What was his secret? Muscle memory.

Phelps has practiced swimming butterfly in an olympic sized pool so many times that his body had built up muscle memory on what to do.

It’s the same concept that allows you to jump on a bike after not riding for years and pedal away. Once you’ve trained yourself, you never forget.

The same concept can be put to work to learn to type very fast and without consciously thinking about it.

When you learn a new movement, your brain creates a memory of the pieces that make up that movement and stores it in your cerebellum. Scientists call this motor learning.

Committing typing to muscle memory frees you from devoting mental energy to thinking about each letter as you type it. You’ll be able to focus on the content of what you’re typing rather than thinking about (or looking for) the next key to press. When your fingers just know where to go, it’s very relaxing.

Want to learn how to build up your own muscle memory in typing? Follow these 3 basic steps—

Motor learning doesn’t happen just by performing an action once, instead it occurs in stages.

It’s just like learning to ride a bike. First, you learn how to position yourself and where your feet and hands should go.

Then you practice individual movements, such as peddling with someone else guiding the bike so that you don’t have to worry about balance or steering.

Once you’ve gotten that down you can practice with balancing yourself, and then steering, until you can eventually put it all together.

That’s why in our typing lessons, we break the process down for you. 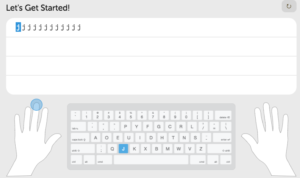 First, we teach you where each of your fingers go, and the best movements to take to press each key.

You see, each letter has a finger that is responsible for it, and you don’t want to mix them up.

You wouldn’t change between your feet to press down on the right pedal of your bike, would you?

Once you’ve mastered that, you can build on it by practicing words. And then by gradually building up your typing speed.

From the beginning, it’s important to take the time to do things right. After all, you want your muscle memory to deliver proper technique to your fingertips, not bad habits you accidentally stumbled into.

If Michael Phelps had bad swimming habits written into his muscles, you can bet that they would have all come out when he was distracted by his leaking goggles.

Practicing the wrong way can be dangerous, as bad habits tend to crop up when you’re under pressure. And they are much harder to correct later. 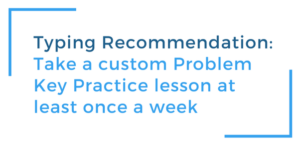 To prevent that from happening, our system tracks your problem keys as you learn! So we can help you retrain yourself early on to avoid repeating the same mistakes and hardwiring them into muscle memory.

To take advantage of this, we recommend you to take a custom practice lesson made up for your problem keys at least once a week.

You’ll find this at the top of your lessons page, just click “Practice” below your Problem Keys:

Each repetition slightly strengthens your brain’s memory of “the right way” to perform the task and consolidate the results into muscle memory. Thus, the more repetitions you’ve performed, the more your brain has to analyze.

Put simply—the more you practice, the stronger your muscle memory will be.

More practice also helps cement what details constitute the action and which are extraneous, environmental factors.

For example, a different keyboard may have a slightly different feel, but the motions to reach particular keys don’t change. Your brain will identify what matters and is integral to accomplishing the task.

Each practice session reinforces and strengthens the stored pattern, making it ever easier to recall. Eventually, you won’t even have to consciously think about it; your body just knows what to do.

World-class coaches have been using the principles of muscle memory to help develop phenomenal athletes, like Michael Phelps, for decades.

You too can harness the power of the muscle memory to help you unlock the skill of typing fast. And you won’t have to pay a professional coach, because you can do it for free with us!

Or, really drive that practice in with one of our fun typing games. 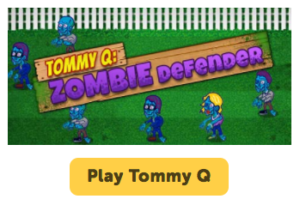 An easy trick to get students to stop looking at their hands
How to improve your typing accuracy
Build Your Own Adventure! Why Student Choice Is Important for All Grades
40
SHARES
ShareTweet