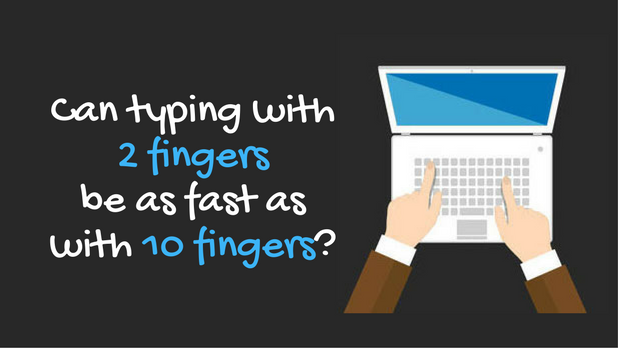 Can typing with 2 fingers be as fast as with 10?

There are plenty of people who can type quickly using just two fingers. Like with any skill, typing with two fingers takes practice, and with more practice speed and accuracy will improve.

So why bother learning to touch type with all ten fingers if you can do fine with just two?

The bottom line is, even the fastest hunt and peck typists will never be able to type as quickly as someone who is making use of all ten of their digits. Here’s why—

Hopping from one key to the next with the same finger is almost like trying to pedal a bike with one leg. Sure you could learn to hop back and forth pretty quickly, but you’ll never be as fast as if you were using your left foot for the left pedal and your right foot on the right pedal.

Like with a bicycle, each key on the keyboard has a finger that is responsible for it. This is designed so that your fingers move as little as possible.

Thus, if you keep your fingers on the home row and just move the necessary finger, you’re guaranteed to type faster than if you’re moving your whole hands around the keyboard.

While this might not seem like a huge difference on a minute by minute basis, the extra time it takes to only use 2 fingers certainly adds up.

For example, if you write 10 emails a day for work, it might take you around 2 hours to write these emails using just two fingers at a rate of 27 WPM. It would take closer to 1 hour to write the same exact emails if you were touch typing at a speed of 50 WPM. That adds up to a full hour of extra time every day!

And looking beyond just the average typing speed, exceptionally fast hunt and peck typists can reach up to 70 WPM while the fastest touch typists can break 100 WPM. This means that as you get faster, the speed disparity between 2 finger typing and touch typing only grows.

In addition to being slower, hunt and peck typing also tends to be less accurate. Since you need to be looking at the keys much more when typing with 2 fingers, you are less likely to catch mistakes as you make them, meaning it will take you more time to go back and proofread work once you’ve finished.

Touch typists, on the other hand, can do this all at the same time, reading as they type and correcting as they go along.

There is no doubt about it, touch typing is a much better bet than the hunt and peck alternative, and it’s worth investing the time and effort that it takes to learn to type with all ten fingers. And it’s never too early or late to get started!

The lessons here at Typing.com will walk you through the basics to train you to start using all 10 of your fingers. Get started now, and you’ll be well on your way to faster typing speeds before you know it.