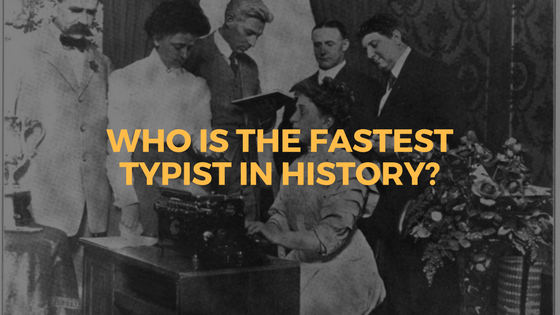 The fastest typists in the world

Typing speed in the age of the typewriter

The World Typewriting Championship held in Chicago in 1906, catapulted the young girl to fame to become the most recognized typist in the world.

Word of her skill traveled so far and wide that when she arrived in London, the Prince of Wales himself asked to see her type.

In just 60 seconds she typed up a 130-word letter for him. Perfectly punctuated and without mistakes.

The prince was so impressed that he asked Rose for her signature on it to keep as a souvenir.

Rose won her first title with a typing speed of 82 words per minute, an impressive feat given how much more difficult typewriters are to type on than today’s keyboards.

Though Rose held her impressive title for 4 years running, she was eventually toppled off the list by H.O. Blaisdell. Nonetheless, she remained a legend and continued to travel around the world to demonstrate her incredible skill.

Which is the fastest keyboard?

Nearly a century later, another female typist rose to fame as the fastest typist in the world.

The year was 1985, when Barbara Blackburn became listed in the Guinness Book of World Records for her speed of 170 wpm. She was even able to manage an average of 150 wpm over the course of 50 minutes. Now that’s endurance!

Even more shocking to spectators than her speed was the fact that Barbara was not using your typical QWERTY keyboard. Instead she typed using the relatively unknown Dvorak keyboard.

This keyboard was developed by a Dr. Dvorak, who spent over a decade studying the English language and hand physiotherapy to design what he believed to be a better keyboard. One on which it would supposedly be easier to learn and faster to type.

Barbara claims that she had always struggled with typing in school with the QWERTY keyboard, and it wasn’t until she discovered the Dvorak keyboard that she was able to reach such remarkable speeds.

Her top speed ever recorded is an astounding 212 wpm.

Who is the fastest typist today?

With the onset of modern-day computers, more competitions and records have been held online through typing apps and other models.

While these records may be harder to verify and not as official, they still hold testament to the impressive typing speeds that are accomplished today with the modern keyboard.

Sean Wrona set another record at the Ultimate Typing Championship with a speed of 256 wpm. Wrona has also unofficially beaten Blackburn’s endurance typing record by maintaining a speed of 174 wpm over a 50-minute duration. Though this record is not recognized by Guinness because it wasn’t monitored by their team.

Both of these incredible speed typers used the standard QWERTY to achieve these top speeds.

How fast are YOU?

Have you ever wondered how fast you can type? Find out with our free online typing test here.

If you start a free account, we’ll not only help you keep track of your progress over time, but we’ll even show you which letters you mess up on most. You can then take practice lessons on just those letters to help you become faster and more accurate!

Try out our free touch typing test today and begin your journey to faster typing.

22 thoughts on “The fastest typists in the world”